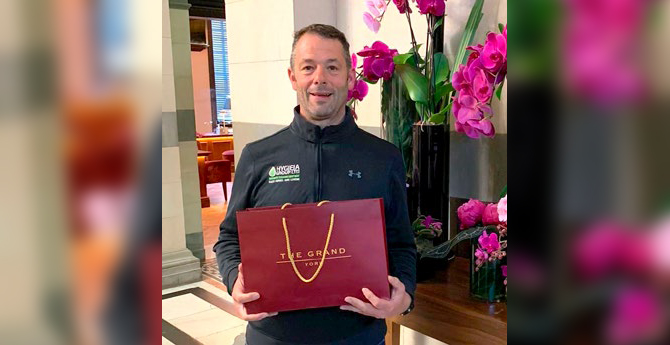 It’s finally happened – a UKHA get-together where members can talk face-to-face, catch up with each other and share news of how housekeeping staff are preparing for the staycation boom.

Let’s have three cheers and join the celebrations at The Grand in York as 30 members of the Yorkshire and North-East region and very kind sponsors gathered. We’ve enjoyed all the monthly Zoom sessions which ensured all could stay in touch and hear from fascinating speakers, but there’s nothing like seeing a smiling face in real life.

The event at The Grand was hosted by general manager Simon Mahon, hotel manager Tanya Furby and executive housekeeper Lisa Williams. The UKHA region was welcoming Lisa to their group following a move in April from Marriott’s St. Pancras Renaissance Hotel close to Kings Cross, London.

Like many of our cleaning experts, she’d also experienced the front line during the pandemic, spending six weeks working at Kings College Hospital, gaining a vital insight to sanitation and facilities procedures.

Liz Smith-Mills, who sits on the advisory council for P&G Professional products, was delighted to see the experts on hygiene and safety procedures and suppliers of products to ensure both guests and team members feel safe, as drinks sponsors of this face-to-face gathering after so many months. As well as the marvellous support of The Grand team, very worthy of mention is Sheryl Popplewell of Fulford Flowers, an award winning, celebrity, TV and film florist, who not only ensured guests could enjoy the sight of some stunning floral arrangements but arranged for a photographer to capture the evening.

Among those impressed by the displays was Andrew Bodle of Hygieia, the washroom and hygiene specialists, who was delighted to meet up with housekeepers and other business people. And special mention must go to one of Lisa William’s room attendants, Riezyl Knaggs, who had revealed to her new executive housekeeper when they first met that away from work she enjoyed singing, particularly Whitney Houston favourites. Riezyl, who hails from The Philippines, agreed to perform for the UKHA guests, who all agreed she provided fabulous entertainment. Talk about our housekeeping hidden talents!