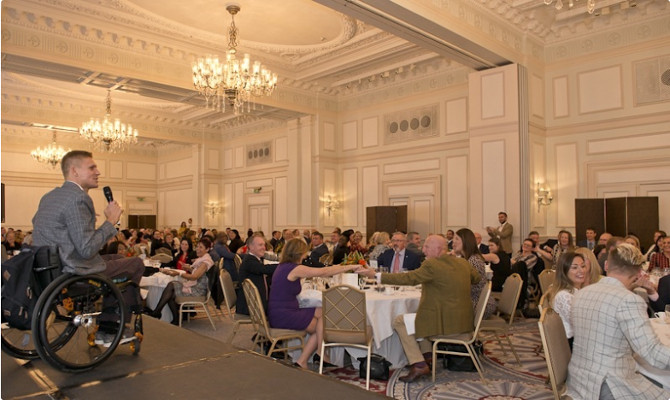 This magnificent affair was attended by 350 industry professionals, including the Housekeeping Today UK team, who networked at a drinks reception before being seated in the Grand Ballroom for a fabulous lunch.

Speaker Steve Brown, broadcaster and former Paralympian, told the audience of his journey from near fatal injury to representing Britain at London 2012 to TV presenter. Brown was surprising, inspiring and instructive. A fall from a balcony resulted in him being paralysed from the chest down.

During a physically and emotionally draining spell in Stoke Mandeville’s spinal injuries unit, he was introduced to a game of wheelchair rugby. Determined to rebuild his life and be defined by what he could do rather than what he couldn’t, he threw himself into the sport.

He became captain of the team and prepared to lead them into the London games. Later, due to injury, Brown was unable to continue playing but was soon recruited by both the BBC and Channel 4 to join their Paralympic and Invictus Games reporting teams.

He’s now a full-time broadcaster and in addition to sport has fronted reports for Countryfile, The One Show and Springwatch. He also embarked on a 900 mile journey alongside five other people with different physical disabilities for BBC One’s Without Limits: Vietnam.

The lunch came to a close at around 5pm, with many staying on in the bar to continue discussions started at the tables.

You’ll find the more articles in the November/December edition of Housekeeping Today UK. Subscribe for your edition or browse online here.