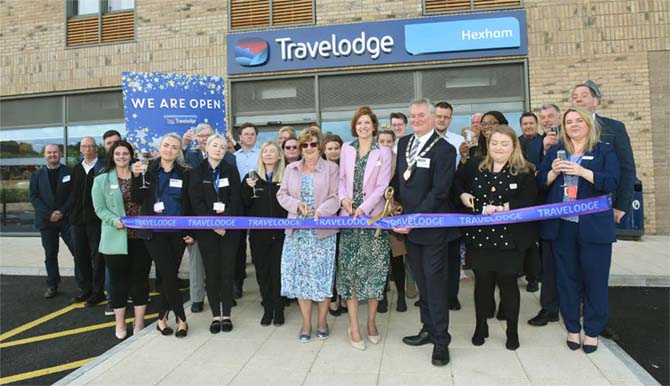 Travelodge’s move towards a budget luxe premium look and feel was very much on show at the opening of its new hotel in Hexham, alongside the announcement of an expansion programme across the North East.

The new design has been created on the success of the group’s budget chic hotel format, TravelodgePLUS, with feedback from the company’s largest consumer study, which surveyed around 5,000 UK business and leisure travellers. Sustainable initiatives include carpeting made from recycled fishing nets, part of a project supporting clean ocean initiatives. The carpet backing is also made of old plastic bottles. Other features include low energy lighting, motion sensing controls and aerated showers and taps.

Travelodge has targeted 16 locations for new opening in the region and says this could create 400 new jobs in towns including Beverley, Bridlington, Knaresborough and Wetherby, Northallerton, Ripon, South Shields and Thirsk.

The 69-room Hexham Travelodge is located in the town centre, close to the railway station and has created 27 new jobs within the community. The hotel is being managed by Jonathan Dunn.