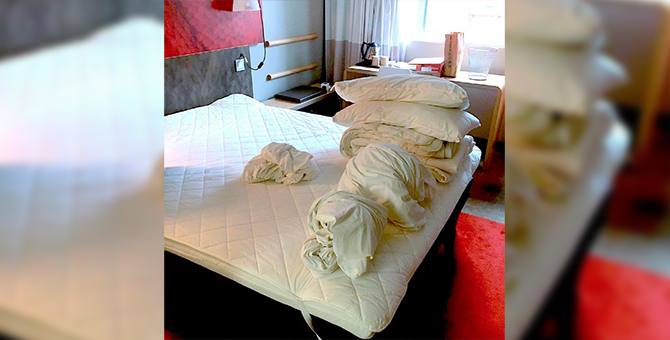 A Scottish social media star best known for his ‘Does it fry?’ online fun where he tries all kinds of food not usually dipped in batter and put in the deep fat fryer, has discovered how he leaves a hotel room can also be ‘news’ that travels the planet.

Darren Dowling, better known as Dazza, posted a photo of his room as he checked out, with the bed stripped and used linen stacked on it, stating: “I always try and leave a hotel room like this. Is this the right or wrong thing to do?”

Many housekeepers joined the debate, expressing how this made their job easier. Some retired housekeepers revealed that, having memories of shifts against the clock, they now did this at the end of a stay as a ‘thank you’ to the latest generation of hotel cleaners.

But it didn’t stop there. The Scottish press and radio picked up on the hot debate, particularly as some responding had written the likes of ’But they are paid to do it.’ That got short shrift from the housekeepers. Before long the story had spread across the globe, reaching Canada, the US and Australia.

As one of his fans wrote on Facebook: “Of all the sweat and stress put into all the content you have made over the years and all you needed to do was post a damn picture of the hotel room.”

Be a champion of the deskless

As we head from spring to summer, water will be in greater demand, so in…

Full marks for the Maids

Congratulations to the team at Maids Head Hotel in Norwich, whose hard work and warm…