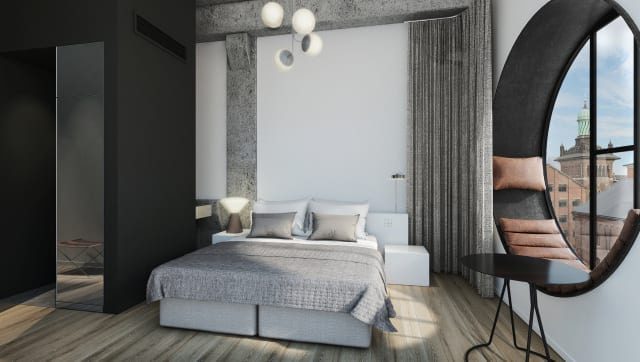 Copenhagen’s recently-opened Hotel Ottilia has rooms that fully disinfect themselves each morning without housekeeping lifting a finger.

The hotel has partnered with Danish company ACT Global in order to use its ACT CleanCoat technology, which is transparent, odourless, and activated by sunlight. The main ingredient, titanium dioxide, is also found in sunscreen.

In tests from national research organsations such as Denmark’s National Research Centre for the Working Environment, the antibacterial spray has been shown to break down microbes that range from influenza and salmonella to mould spores and allergens.

Cover a room with an invisible insulation, and it can purify the air for up to a year, removing contaminants such as cigarette smoke or other odours. Researchers have been testing the system for two years, said Karim Nielsen, CEO of Brøchner Hotels, Ottilia’s parent company. “What really sold us on it was that it would make life so much easier for our staff,” Nielsen says. Housekeepers don’t have to apply chemical detergents and cleaners or breathe their fumes.

They can vacuum, dryclean linens, and wipe down surfaces, and CleanCoat does the rest. Guests also benefit: Their rooms are cleaned faster without using chemicals that can cause allergic reactions. Nielsen estimates that each room costs $2,500 to cover with CleanCoat. “The technology is expensive,” he says, “but we’ve reduced the labour load by 50 per cent. It’s giving our staff a much easier day and reducing our water consumption.”

Scalability could become an issue with CleanCoat. Nielsen has to fully empty a hotel room of furniture to spray it with CleanCoat—something that tends to happen only during renovations—and the formula has to be reapplied each year.

You’ll find the full articles in the May / June edition of Housekeeping Today UK. Subscribe for your edition or browse online here.