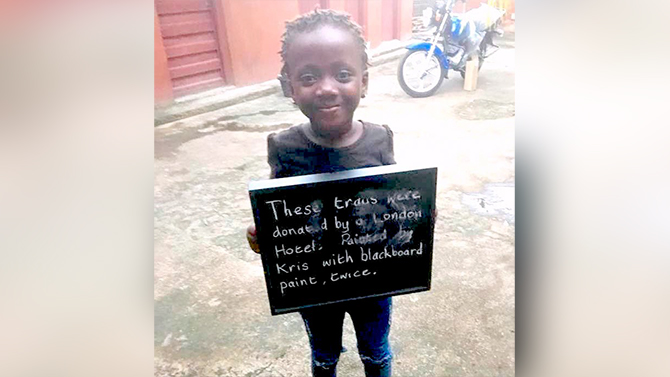 When CleanConscience sends out a ‘collection round email’ to their hotel partners they always add that the charity accepts donations of surplus or redundant hospitality items. This might be furniture, soft furnishings, towels, linen, bedding, cutlery, crockery and even ‘lost and found’ items left behind by guests.

But what happens to the items CleanConscience receives? A good example is provided by the story of some 300 coffee trays offered by Andaz London Liverpool Street, as they planned to replace them. Not one to pass on any opportunities to divert anything possible from being wasted, CEO and Founder Gwen Powell asked to see a sample. As soon as she held a tray and turned it over to look at the back, a seed planted some weeks before raised its head.

The Kori Women’s Development Project, one of their sister charities, were hoping to source blackboards (chalkboards) for schools Kori supports in and around rural Taiama, Sierra Leone.

It took some weeks for the project to fall into place but, just before the pandemic forced us into lockdown, CleanConscience hosted volunteers via Friends in Need (Bucks and Berks), to lightly sand and paint the trays with chalk paint, and then when they could no longer meet in groups another volunteer, Krzysztof Radziwon, continued the process.

Kori managed to arrange a shipment to Sierra Leone in October and two tonnes of soap powder and soap noodles donated by CleanConscience accompanied the blackboards together with 1,500 pieces of chalk and 150 board cleaners, brilliantly produced from end-of-life towels, to benefit small schools in villages with no equipment.

Be a champion of the deskless

As we head from spring to summer, water will be in greater demand, so in…

Full marks for the Maids

Congratulations to the team at Maids Head Hotel in Norwich, whose hard work and warm…