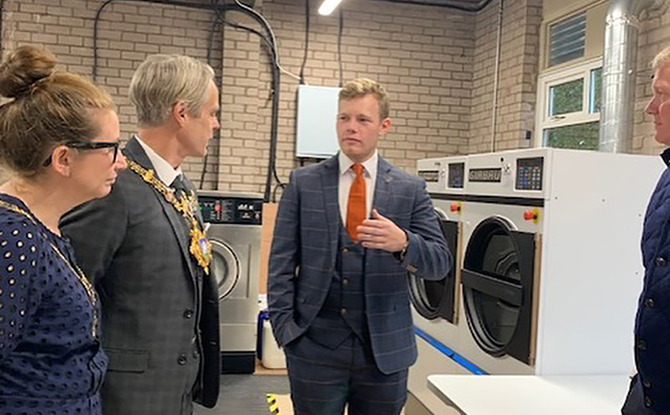 The effect of COVID-19 restrictions on laundries and the hospitality businesses they serve was featured in a Sky News report on the day when MPs voted to introduce the new tier system from 2 December.

The news channel visited RV Pure Clean laundry in East Lancashire where director Joseph Hook revealed to the cameras some £20,000 worth of folded and stacked rental hire linen which he explained “hasn’t moved in months.”

Hook also told how his business had been planning to take on 10 additional staff to help with contracts they picked up after the first lockdown but had now been forced to stop the process. RV Pure Clean opened in 2019 and within a year had moved to larger premises in Clitheroe.

The report also focussed on Bashall Barn, an exclusive wedding venue with panoramic views across the Ribble Valley. Wedding manager Rebecca Barnes shared her worries, saying that with the first possible wedding bookings they might take could be in May or June next year the business faced at least 12 months with no income other than limited government support.

The latest restrictions put Ribble Valley in the highest Tier 3, grouped with other areas in Lancashire which have a much higher infection rates than those recorded locally, which are also lower than in many areas placed in Tier 2. MPs voted 291 to 78 against to introduce the new tier system. Those who rebelled against the government appeal for support included the Ribble Valley’s MP Nigel Evans.  The restrictions are due for review on 16 December and PM Boris Johnson has indicated that a more localised approach will be taken. He said in the House of Commons debate: “There’s no question people feel that they have been unfairly attracted, by proximity, into a higher tier than they deserve.”