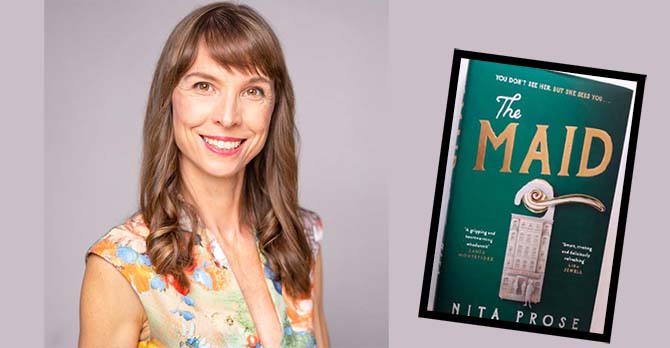 There can only be one ‘Book of the Year’ for all whose working lives revolve around hotel housekeeping. It’s The Maid, a worldwide best-selling whodunnit where by page 7 we are introduced in fine detail to everything on housekeeping assistant Molly Gray’s trolley, right through bed and bath linen and toiletries to the full cleaning kit.

The treasured trolley is a ‘cornucopia of bounty and beauty’ according to Molly (and yes, she’s had plenty of Molly Maid quips in her time), the heroine of this gripping debut novel by Canadian author Nita Prose. Molly is, at the very least, something of an obsessive-compulsive individual with a few other socially awkward quirks revealed as she narrates her story alongside revelling in returning rooms to a ‘state of perfection’.

The fascinating plot sees Molly discover a high-profile guest dead in bed at the boutique Regency Grand Hotel. Her previously ordered if difficult life spirals in various directions, including being a prime suspect for his murder. Any reader will be hooked, but for those of us with an inside track there is the bonus of plot details such as Molly’s visits to the hotel laundry, thoughts on her uniform, tips, and interactions within the hotel staff pecking order, from fellow housekeeping assistants to bosses.

If you’re wondering how the author came up with such a character, the answer is during a business trip to London. Prose tells how she returned to her hotel room one night and accidentally startled a member of the housekeeping team: “I remember her stepping back into a shadowy corner, and the embarrassing part is she had in her hands my track pants, which like a fool I had left in a tangled mess on my bed.”

On the plane home, thinking about how housekeeping was such an intimate and invisible job, it struck her ‘like a lightning bolt’ how a character like Molly could be at the centre of a mystery thriller. While still in the air she began to scribble down story themes. The result is a book published by Penguin Random House in New York and later in the UK by HarperCollins, picking up accolades as enthralled readers spread the word. Now Universal Pictures plan to adapt it into a film with Oscar nominee Florence Pugh set to play the title character.

In the meantime, our guests who’ve read The Maid will perhaps be thinking more about the housekeeping team. As Molly says: “I am your maid. I know so much about you. But when it comes down to it: what is it that you know about me?”

The inside story on outside dirt