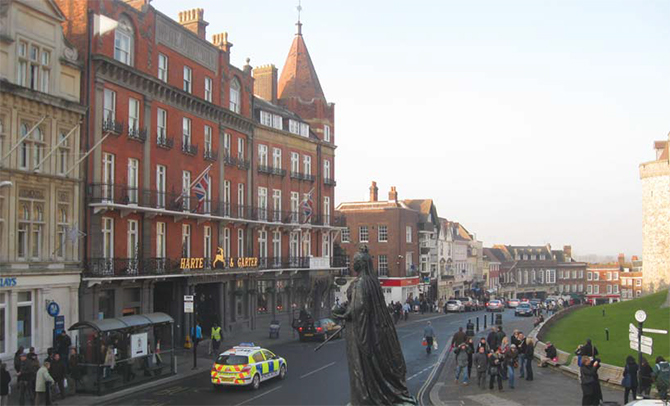 The Harte and Garter Hotel in Windsor has been seen by millions across the world watching televised Royal Weddings – and now, as it faces possible closure for good, operations manager Lauren Collins has written a heartfelt plea to HM The Queen, who has been shielding at the castle just yards away across the road.

The hotel’s parent group Suite Hospitality, which also ran Makeney Hall in Derbyshire and Buckerell Lodge in Exeter, has gone into administration, putting 110 jobs at threat as well as a lot of history. In her letter to the royal neighbour, Collins invites the monarch to pop to the window and recall how this ‘hotel runs in the blood of Windsor’.

She also shares with the Queen some of what has been happening inside The Harte and Garter during lockdown. While most staff were furloughed, a core team stayed and helped by taking in key workers as well as vulnerable or abused people Most recently this included a group needing to quarantine themselves, so staff had to be tested, stayed away from their families and moved into isolation with them for two weeks, managing all the washing and cleaning.

The administrators have suspended all bookings for the hotel group, which it hopes to transfer to new owners. Her Majesty may not be able to personally intervene in all this, but it’s hard to imagine Windsor without that historic landmark opposite the castle.

Better Cotton, the world’s leading sustainability initiative for cotton, has launched a 2030 Strategy and…

If what’s going on in the Lake District is anything to go by, 2022 looks…