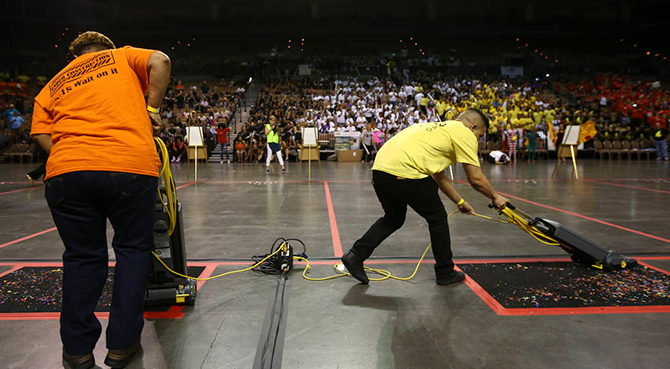 Housekeeping staff at Las Vegas hotels have an added incentive to work hard and hone their skills on the job.

As reported in the European Cleaning Journal, every year they are invited to take part in the Housekeeping Olympics, held by the International Executive Housekeepers Association to celebrate their work.

Staff of 15 top Las Vegas hotels took part in the 2019 competition which was held in October and won by a team from The Venetian Resort.

The ‘Olympics’ comprised five events including the Mop Relay where employees had to weave their mops around a slalom course comprising more than a dozen “Caution, wet floor” signs before handing over to a teammate.

Part of the games is also a vacuuming event which sees cleaners competing to hoover up hundreds of pieces of confetti from a patch of carpet in the fastest time. A bed-making contest assesses contestants on their speed and accuracy, and other events are the Buffer Pad Toss, where staff hurl floorpads to team mates on the other side of a room with the aid of a toilet plunger handle; and the Toilet Paper Toss where entrants throw as many toilet rolls into a bin as they can against the clock.

The 2019 contest was held at the Mandalay Bay Events Centre in Las Vegas. “The point of the Housekeeping Olympics is to celebrate the city’s housekeeping professionals,” said Mandalay Bay president Chuck Bowling. “The event is one small way to thank and celebrate hard-working people.”