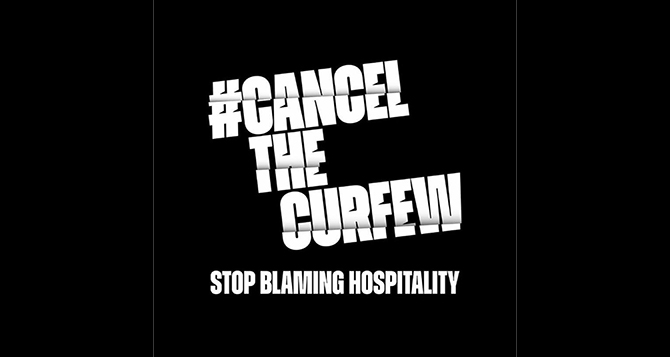 A new campaign #cancelthecurfew has been launched in a bid to get Boris Johnson to reverse the COVID-19 ‘curfew’ restrictions which are adding to the already serious impact on hotels, restaurants and pubs.

Some venues are already reporting a 60 per cent drop in already reduced revenue since the new ‘close by 10pm’ rule was reduced, costing an estimated £5.5m a day in London alone. The campaign is being led by hospitality professionals with the aim of putting pressure on government to reverse the policy before businesses close and thousands lose their jobs.

They had a silent protest and social media ‘thunderclap’ at 10pm on Saturday October 3rd. Workers in hospitality were asked to stand outside their premises for a clapping session, images of which will be found on the likes of Twitter, Instagram and Facebook.

Supportive MPs have written to the Prime Minister, demanding that the medical evidence behind the decision for the curfew be revealed, and that it should be scrapped if there is none. They are also seeking a new furlough scheme for affected premises and extended business rates exemption.