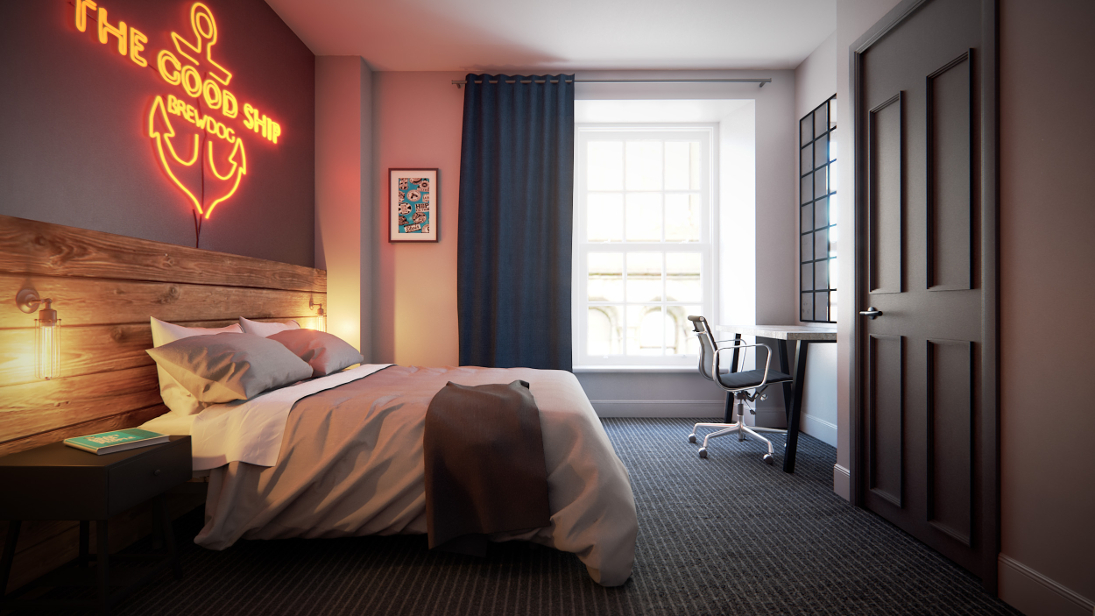 North-east beer giants BrewDog have opened the first Kennels site in the UK in Aberdeen.

Brewdog’s Columbus brewery in Ohio has also launched a Kennels hotel. The craft brewer confirmed that Aberdeen and Columbus will be the first in a series of BrewDog Kennels, with others to follow including Paris, Manchester, Berlin and London.

The BrewDog Kennels in Aberdeen launches just a few months after their DogHouse Hotel in Columbus was named one of the ‘100 Best places on the Planet’ by TIME Magazine.

The guest experience at the Kennels includes a welcome craft beer at check-in, and shower beer on offer in every room. Rooms also have French-press coffee, a record player and vinyl and a guitar. Food and beer room service can be ordered from Brewdog’s own Castlegate bar downstairs via their Hop Drop app. Further room touches include bathrobes, a beer book library, board games and sustainablysourced toiletries.

The mattresses, mattress toppers, duvets and pillows toppers are from Simba Sleep. Rooms are fully dog-friendly, with dog beds and treats on offer.

BrewDog captain and cofounder, James Watt, commented: “Our BrewDog Kennels are a revolution in accommodation, sparked by too much time spent in immediately forgettable hotel rooms. We firmly believe that where you stay in a new city should be your home from home, so have brought the spirit of our DogHouse Hotel and its reverence for great beer to a new series of mini-hotels. And what better start for the BrewDog Kennels than our home city? Aberdeen is an incredible place for craft beer so we have upped the ante with our own take on accommodation. To paraphrase the song; you can check out but you may never want to leave.”