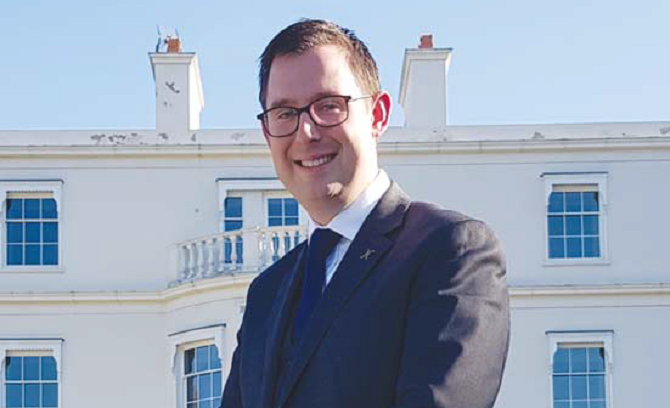 The 240-acre site has hosted many guests including the Royal family, top sporting stars and more. With the history of the building dating back to the mid 1700s this really is a place that truly stands out from the norm. Coworth Park was turned into a hotel just over eight years ago and the whole estate underwent a complete restoration.

McFeat has been at Coworth Park since the beginning and was part of the team that opened the hotel. His input was invaluable, choosing furnishings and fabrics that would suit the style the company envisaged. McFeat ’s journey began way back, when he was a child.

His parents who have been in the hospitality business for most of their lives, his father as a footman to the Queen at Government House in Australia. At the age of three his parents purchased and set up a country house hotel in Cornwall called Stamford Hill Hotel, where he and his four brothers were all encouraged to help in the business.

Although the family tried to discourage following in the family footsteps, this is all McFeat had ever wanted to do. McFeat really has been through every department and finds this route the best for all his staff too. He used to think that housekeeping wasn’t that important a role within the hotel – that was until he started to run a housekeeping department. Then he soon changed his mind.

Tell us about your career in the industry.

I attended Plymouth College and gained my BTEC in hospitality management and then went on to an assistant events manager role at the Falcon Hotel in Bude, Cornwall. Having decided my future was in hotel management I moved to Hotel du Vin and Malmaison Hotels undertaking various roles – deputy reception manager, graduate manager, front of house manager and deputy GM.

It was in June 2010 that I took the role of deputy head housekeeper at Coworth Park, as part of the opening team…(continued in full article).

You’ll find the full article in the November / December edition of Housekeeping Today UK. Subscribe for your edition or browse online here.