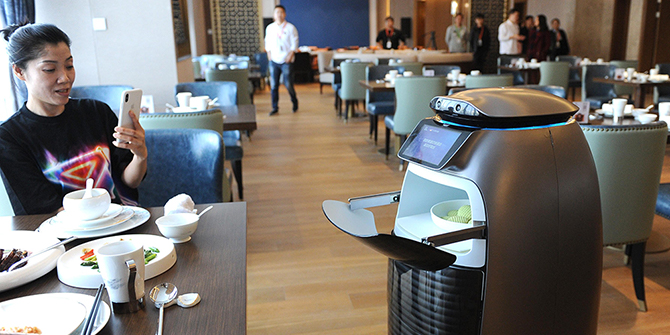 The Chinese tech company Alibaba is known for its ecommerce platforms, but they are branching out and testing and implementing tech concepts that span from retail to restaurants, and even hotels. We came across the story on CNBC’s website.

Alibaba’s futuristic FlyZoo hotel is a stone’s throw away from its headquarters in Hangzhou – and almost everything you can imagine is automated.

The reception has no counter and no sofas. It’s completely empty apart from a massive digital wall.

The 290-room so-called ‘smart hotel’ welcomed its first guests in 2018. And while you won’t see people at reception like we’re used to, there are still some staff around.

For example housekeeping, which Alibaba says still have to use a traditional keycard to clean a room. The idea here isn’t for Alibaba to open its own hotels. It’s using FlyZoo to develop technologies it can sell to existing hotels chains. One of its partners is Marriott International.

Many of the deliveries and services are made by robot butlers, except for soups, and things like irons and ironing boards. And the traditional hotel vending machine is operated by the AliPay app where guests scan the QR code on the refrigerator, and then it unlocks. The app recognises the product picked up and charges the account direct. Guests enter the gym through facial recognition too.

In the bar guests use a QR code at the table where they are greeted with a menu of drinks. And perhaps unsurprisingly, the drink is being made by a robot.

All being tested and possibly coming soon to a hotel near you. We’ll be keeping watch!